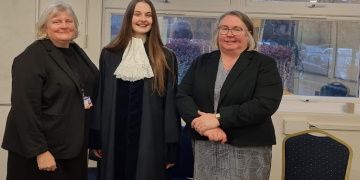 Law, Criminology, Politics and Philosophy students enjoyed listening to an interesting presentation about issues in the law and the structure of the judiciary in England and Wales.  Politics students were interested in hearing the judges share their thoughts about the relationship between the government and the judiciary, including the role of the Supreme Court in the two Gina Miller cases.  Students wanting to pursue a career in Law were given valuable advice about the different routes into the profession.  Finally, everyone enjoyed dressing up in wigs and gowns, as we can see from the photos.

We are grateful to Judge Walden-Smith and Judge Jane McConnell for giving up their time to meet with us.